I am please to say that the documentary that I have been personally making about my step-dad Awi is finally complete. It was made for Awi and his family to treasure for generations to come.

AWI from stills&motion on Vimeo.
Posted by Unknown at 12:02 No comments:

Just bringing in some quad-copter GoPro footage shot at 50fps 1080p. Media Composer only supports 50fps up to 720p. Resolve can help you get around this (AfterFX can also do the job but isn't free). To convert your 50fps footage to 25fps in resolve:

I also have Canon C300 footage shot at 720p 50fps. To get this footage playing back in slo-mo:
- Create a new Avid project
- Select 720 50p from project settings
- Import/consolidate/transcode footage
- Close project
- Open, in my case, 1080 50i project
- Open bin containing slo-mo clip

And that's it. clips should playback in slo-mo.

Btw while in Resolve I also find the stabilizer much better than in avid.

I learned something new today..

One of the main reasons why we fell in love with the 5D was the shallow depth of field and I have heard many times that a larger sensor creates a shallower depth of field which isn't technically true.

Depth of field is determined by the focal length and aperture settings of the lens and distance from subject. The sensor size only impacts the size of the frame. With larger frame you can get closer to your subject - where depth of field is more shallow, i.e. macro photography. With a smaller sensor camera you must stand further away from the subject where the depth of field widens. So in conclusion... a larger sensor size doesn't create shallower depth of field but is does facilitate it.

The following workflow describes the way I have been doing things. There may be more efficient ways to do them and please let me know if you have any suggestions.

The series I am currently working on is shot on a C100 recording internally and externally to a Samurai Ninja to DNxHD 120 MXF files, a Canon 5D mk2 and a GoPro mounted on a Phantom quad-copter.

Media Composer 7 added the ability to consolidate/transcode in the background so this process doesn't hold up the editing process.

The Avid Media Files folders and project files are then manually backed up onto external drives using SyncToy 2. I currently have 11TB of internal media storage capacity.  The external backups are taken off-site with me every day (which makes cycling to work extra joyful!)

In this series the slo-mo effect is used a lot. In the last ep almost half of the 26 mins was slo-mo'd footage. For this I have used the twixtor plugin. I have found that it works well to varying degrees depending on the shots you are affecting.

Once the edit is complete an embedded AAF and QuickTime movie is sent to soundmix and I begin colour grading in Resolve. The unaffected footage can be exported/imported as an AAF. Twixtor'd footage and video mixtdowns need to be exported as a movie. I create a separate sequence for the twitor'd footage making sure any transitions are included in the length of each clip as there are no handles, remove gaps, and export (same as source) a movie. I export the rest of the sequence as an AAF linking video media only.

In Resolve I import the AAF. I have to do this twice to account for the two media drives. Upon the second import the AAF relinks to media from both drives. This seems to take much longer than it should and I have often wondered if I am missing something that could make this step faster. After grading I render the clips into a new Avid Media Files folder.  In MC I import the new AAF. This final step has not been without its problems in the past and I find that if I simplify the original sequence to only the clips I want to grade (no titles graphics etc) I get better results.

The slo-mos need to be added to the media pool and placed into a new timeline and edits inserted to separate the clips. Once graded I render the clips as single clips as DNxHD 120 MXF files to a folder. Then fast-import the files into MC and place them back into the sequence. To fast-import select the 'use the source file's resolution' option.

It's a bit fiddly but it will do for now.

One thing about Resolve Lite is beware of the using the blur where there is any camera movement and highlights as it may result in jittery motion. The full version has motion blur but I can't confirm it will solve this issue.

In November 2013 I began working on a series for Maori Television that has yet to be released. I am the sole editor / colorist for this 12 episode documentary series. I have completed 8 eps to date. 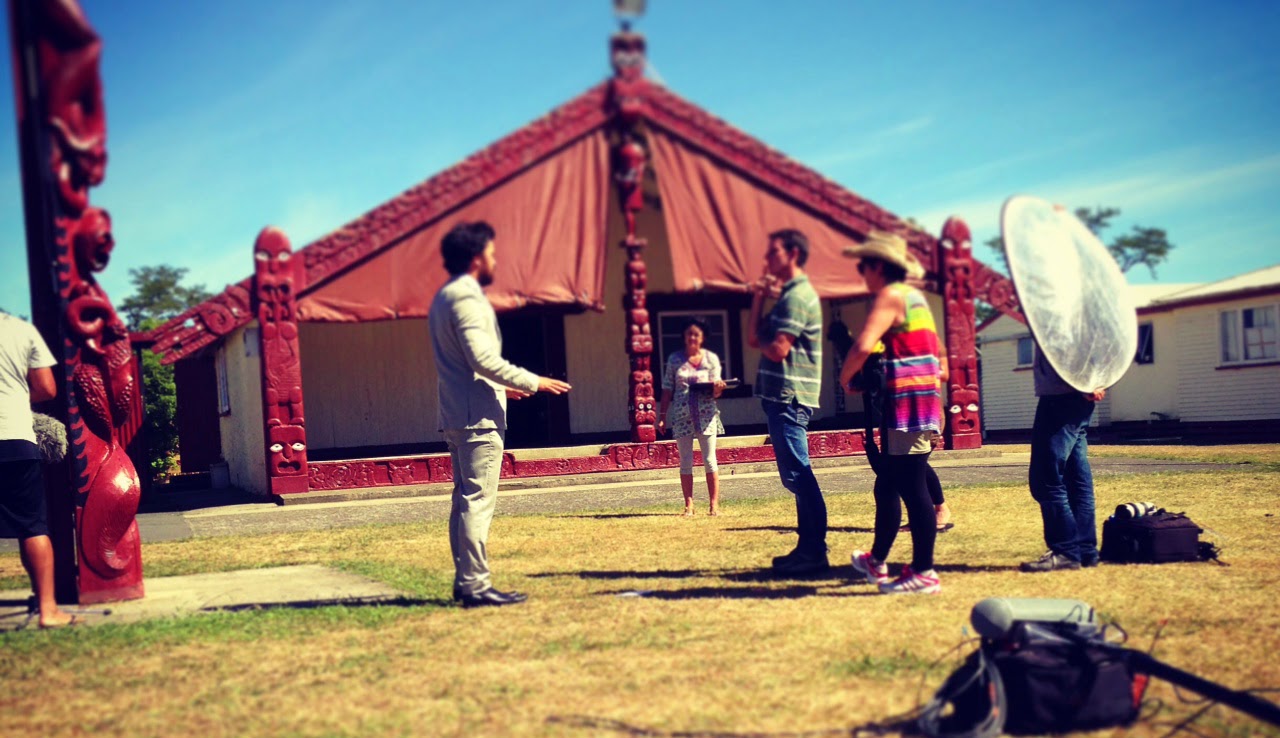 Hardware.  I started this series using my factory Dell XPS 8300 which performed well despite it's modest specs but strangely Dell computers aren't supported by Black Magic products. So even though Resolve worked ok on my Dell I wasn't able to connect a reference monitor via a Black Magic PCI card or USB hub.  This is a problem since monitoring is essential for colour-grading.  So I bit the bullet and upgraded my PC. I decided to do a DIY build. Why?  Because I thought it would be fun and it was. 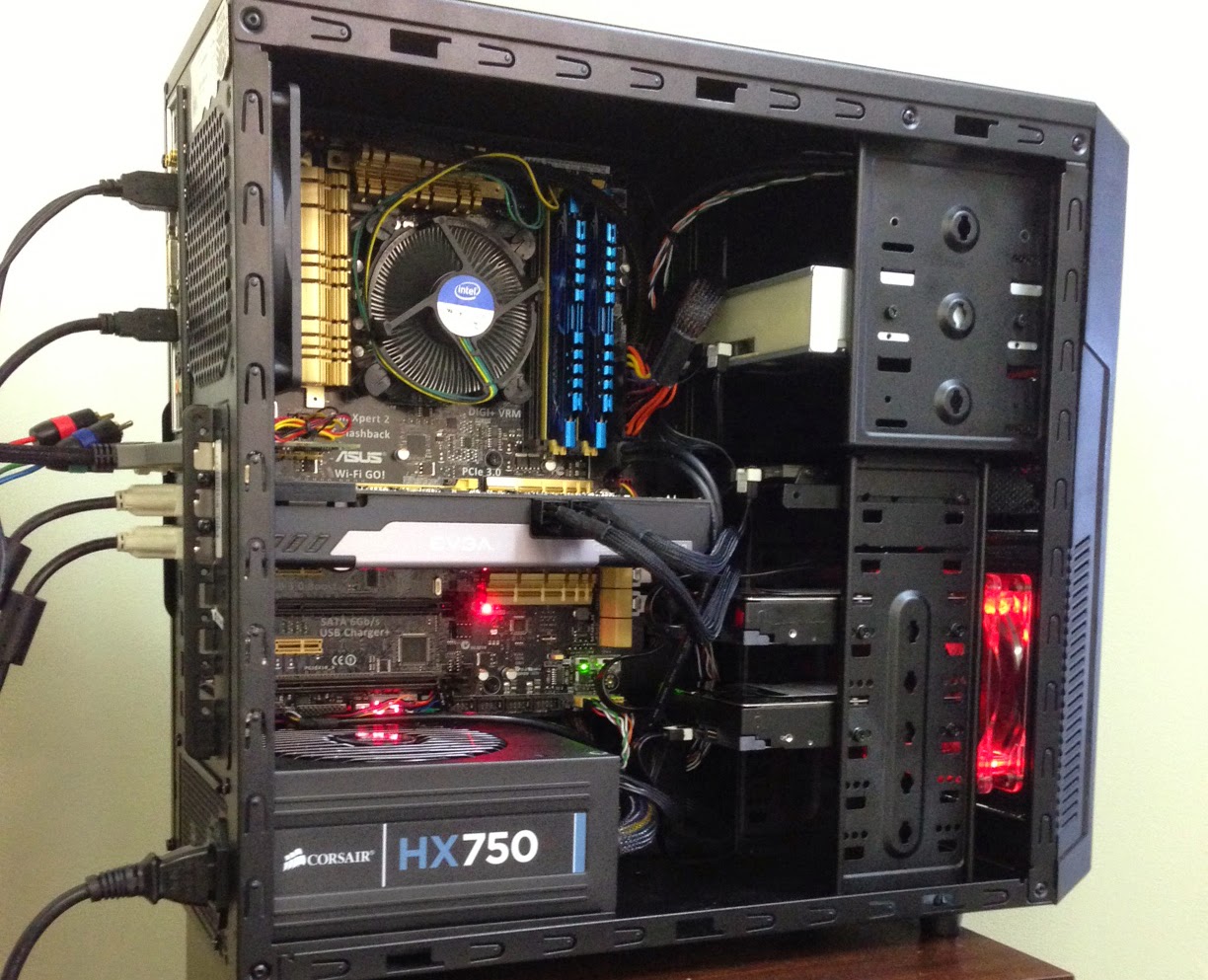 Black Magic have a list of certified motherboards so that was my starting point. I also found the videoguys guides very helpful.  These are the components I went for:

The Asus Z87 has on-board thunderbolt which will be useful to my future storage solutions.
I went for the i5 at first to cut cost and upgraded when I could afford to.  My attempt to over-clock the cpu was pretty sad so I reverted to the default settings for stability. There are so many video cards on the market it was a nightmare choosing one but GTX760 has been working nicely so far.

When I wanted to upgrade the RAM I found out the hard way that Win 7 Home Premium only supports up to 16GB of RAM. What's more OEM versions can't be re-sold as they will not work on any other PC's. So I had to buy Windows Pro and let the Home Premium gather dust on the shelf. 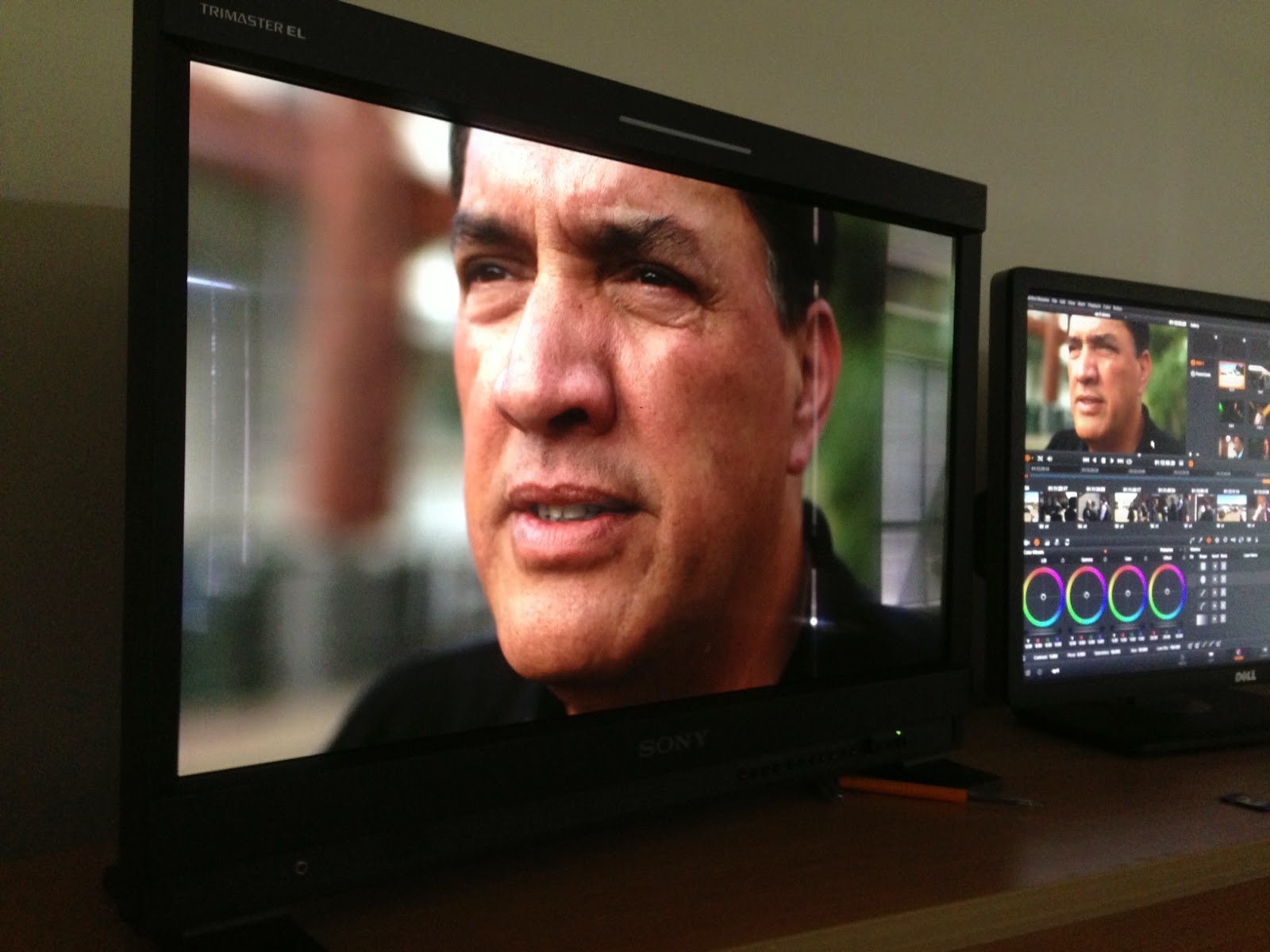 I purchased an ex-demo Sony PVMA250 25" OLED from protel and yes the pictures are glorious! 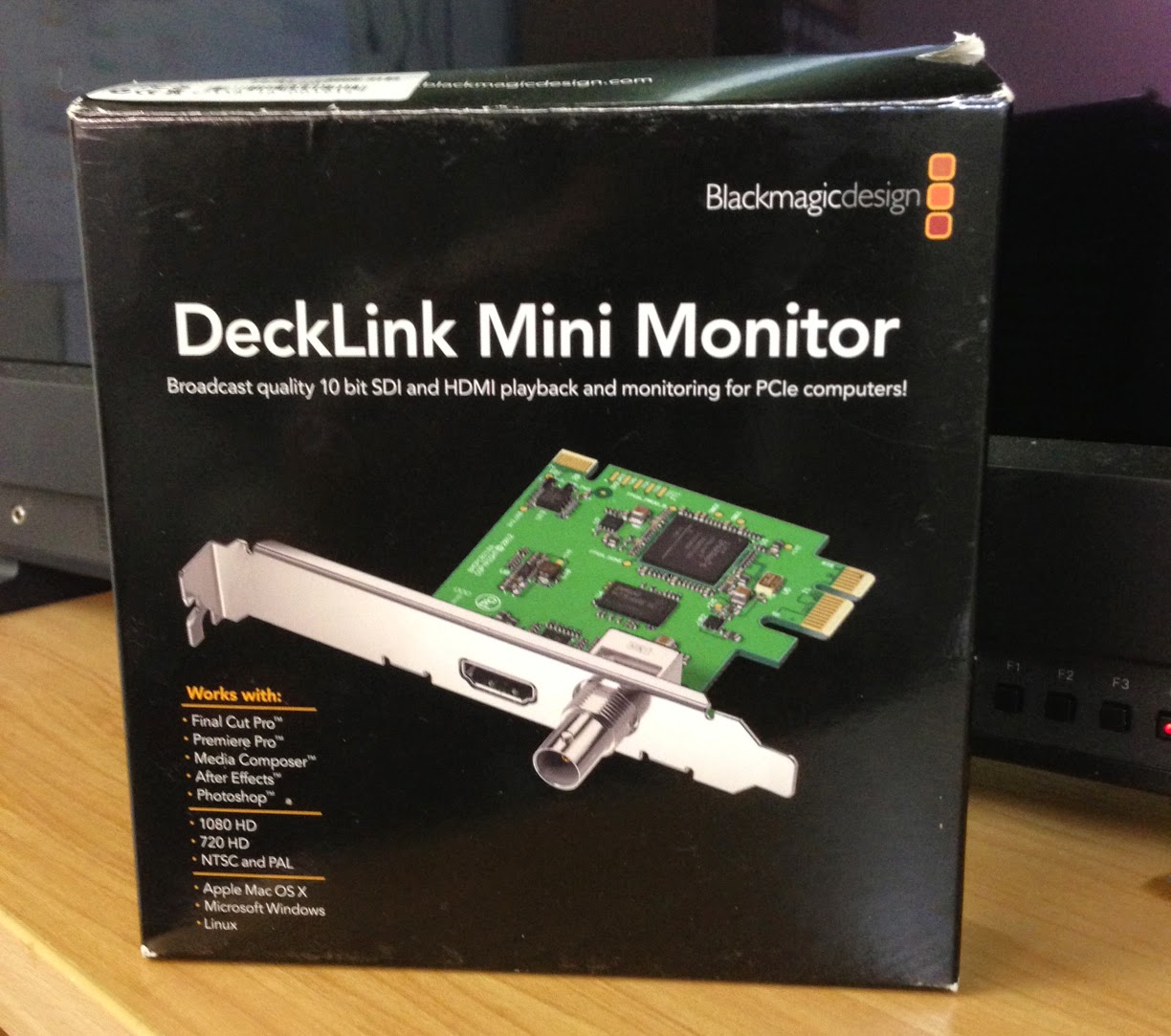 The card is great BUT the audio is embedded in the video which means either playback the audio via the monitor or get an audio extractor to extract the audio from the HDMI signal. There are a variety of these on Ebay but I went for this unit from Jaycar Electronics ($99.90 + GST). Black Magic also sell products that are more expensive. 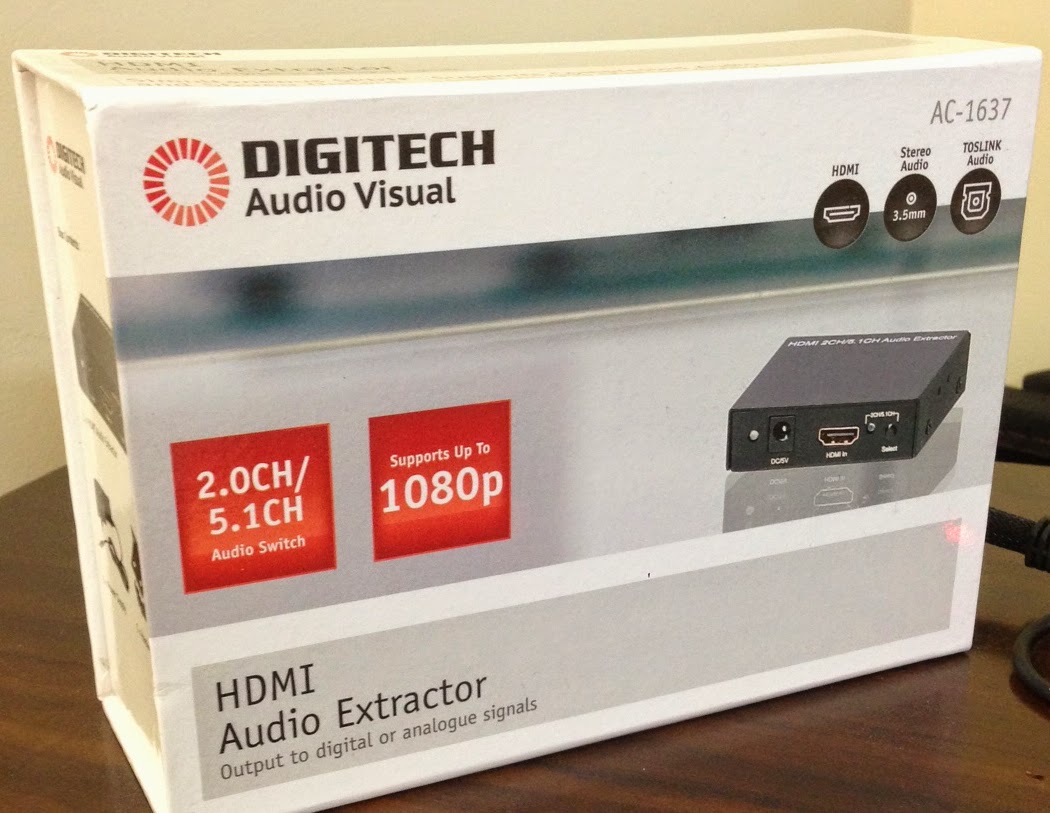 I have noticed a slight hum coming though but have yet to isolate it's source so will say no more. Sadly Media Composer and Resolve aren't so good at sharing so I have to close one of them to monitor the other which is a small pain. Otherwise my system is running sweet!

I will discuss the various workflow issues in my next post.