Working with 5D's and Premiere Pro in practical terms

I have just completed the first 6 episodes of a documentary series to be broadcast on Maori Television later this year. This series was shot entirely on 5D's. It was also my first time editing with Premiere Pro. Here are a few observations. 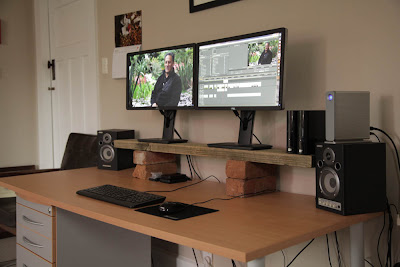 Production
Though my primary role on the series was that of editor I was also called upon to camera operate on the odd occasion. Our shoots were fairly basic - mainly talking heads plus various GVs. We were required to travel to various locations around the north island. Our relatively compact kit included: 2 Canon 5D's, 3 Zeiss Prime Lenses, tripod dolly, lighting kit, Zoom H2N, shotgun & radio mics.

Over two months of shooting this kit was put through its paces. The kit was light and compact. During the 20+ interviews the 5D's performed without a hitch. The only annoyance being the 11 min record time limit and having to change batteries regularly. 16G CF cards gave us 40+ minutes so 32G cards were plenty for the average I/V. At times changing lenses got a bit laborious but the images produced by the Zeiss 100mm in particular were very pleasing. We did miss the slo-mo capabilities of the 7D and also the HD signal to our 6" HDMI monitor. Recording audio on the Zoom was pretty painless, however, we did come across a fault when the battery of the Zoom died mid-interview and the data was lost. we only discovered the data-less file a number of weeks later by which time it was too late to recover. A known issue and costly technical error as the interview had to be re-done.

Post Production
After Final Cut went bonkers with FCPX I decided to give Premiere (CS5.5) a shot. I also decided to go with a PC running Windows 7 64bit. Having spent most of my time using Apple Macs I hit a steep learning curb switching to a PC. Lacking  in knowledge and experience I decided to get a ready-made desktop Dell XPS 8300 opting for the highest specs available - i7 chip, nvidea GTX 570, 8GB ram (upgraded to 12GB), USB 3.0 ready, Blue-ray Burner, Dual 23" UltraSharp Monitors. For storage I purchased two WD Mybook 3TB USB 3.0 drives (one for back up). This was soon insufficient space for the new and archival material so I acquired another 3 TB of storage. 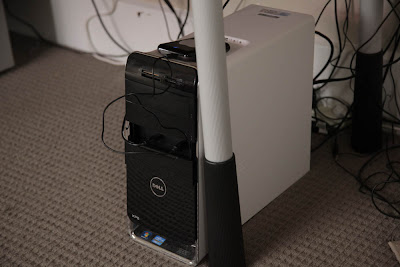 Premiere CS5 introduces a sequence preset for DSLR material which allows native editing of 5D and other DSLR footage. The smoothness of playback depends on the speed of your computer. On my PC the footage played back pretty well but wasn't completely smooth at full res (you can reduce the playback resolution in settings). The nvidea GTX 570 isn't listed as supported by the GPU acceleration but a quick google search lead me to a link that showed me how to make the simple modifications to allow it to work. 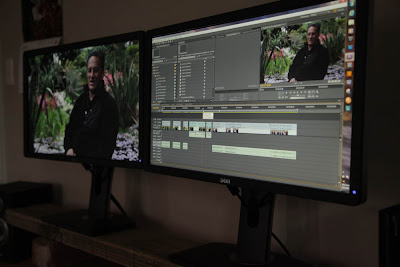 One fatal flaw I encountered with the GPU acceleration is that it doesn't like working with still images. While manipulating still images in a sequence premiere would inevitably crash after a number of minutes. After googling the problem it seems it is a known issue that has been around since CS4 and has not been resolved to date. The best way around it is to turn off GPU acceleration while working on stills and turn it back on when rendering or exporting.

Other than that, Premiere ran pretty well considering the size of my project ballooned as I created five 26 minute episodes in the one project (the project takes a minute to re-link the 6000+ files upon opening). I particularly enjoyed the dynamic link between Premiere and After Effects. I was less sure about dynamic linking from Premiere to Encore and opted rather to export using the DVD or Blue Ray presets.

The only other programs purchased were Plural Eyes and Mc Drive.  The former was an absolute essential and massive time-saver in syncing up the 5D footage. The latter was also very important in moving between platforms without issue.

A second major issue arose when exporting an OMF for sound mix. Where  I had a stereo signal split into two single mono tracks the OMF only exported one of them. This occurs when those tracks are also located in another sequence as a stereo track. I'm not sure of the exact details but after many failed attempts to work around the issue I resorted to rendering and replacing the affected tracks and then exporting them separately. The problem with this is that you don't get the usual option of adding handles to each clips. This is also a known issue that Adobe will have to address pretty quickly if they want their product to complete with the other NLE's.

Once sound-mix was complete I exported the shows as Quicktime movies using H.264 compression. Each episode took about 45 minutes to export and were about 10-12GB in size.

Overall we were pretty pleased with the results. For this kind of filming we were able to work around the limitations of the 5D and managed to get some stunning imagery from this inexpensive little kit. Though far from perfect, in a professional setting both the 5D and Premiere Production Suite 5.5 get a steady tick and a bang for buck rating of 8/10.
Posted by peter lee at 02:53 No comments: